Zoom backgrounds are just so… cheesy. Reminiscent of some kind of student compositing project from the early 2000’s. 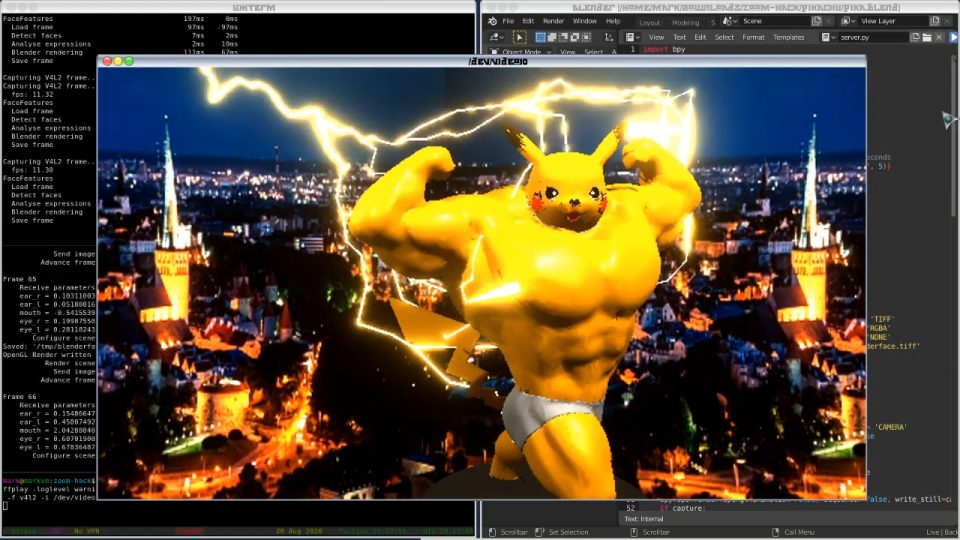 Let’s see if we can do something cooler 🙂

First, what tools do we have available?  Unlike in the early 2000’s, where the multimedia software landscape was torn up between a few proprietary players, we now have a nice suite of free, open-source tools, that can be integrated together into complex fully-automated pipelines for example:

What do choose?  Well, that depends on what we want to do.  We could do some augmented reality, injecting CGI stuff into the webcam stream…  But children already do that with smartphone apps nowadays.

Let’s make challenging…  How about taking some inspiration from Black Mirror:

Ok, the challenge is to develop a filter which will map my facial expressions (from a webcam stream) onto some 3D CGI model in real-time, and push that into a mock webcam stream that other programs (e.g. Zoom, Jitsi) can then use.

Since we want to render a 3D scene, we’ll use Blender for the CGI generation.  The pipeline is probably going to be something like this:

While Blender has a “real-time renderer” (Eevee), the term “real-time” can have different meanings in different contexts.  In my case, I need Blender to be able to render a frame for me within 50ms of me requesting it, so that the latency of the fake webcam stream is not too high.  I suspect that when Blender devs say “real-time”, they mean “you don’t have to wait overnight for it to render” rather than the “hard real-time” which I’m looking for here.  But we play the cards we’re dealt, let’s see what the best we can achieve with Blender is.

We’ll use Linux for this, although the resulting project could be ported fairly easily to other platforms.  The only platform-dependent part should be the video/webcam API.

After figuring out what responsibilities go to what software components, our data flow becomes something like this:

We want to have less than 100ms from frames being read from the webcam to them being pushed into the loopback sink, otherwise audio will fall too far out of sync and the face movement in the resulting video will just look random instead of being coördinated with speech.

We will use the following 3rd-party stuff:

Since we want consistently low latency and hassle-free multi-threading, I’ll use C++ for this rather than e.g. Python.  This also gives me some opportunity to experiment with image data representation and colour spaces, as a learning activity.  In theory, the threaded stages of the pipeline could be mirrored in Python using pathos.multiprocessing, but we’d still have latency spikes and far lower throughput for computations done within our own code.

Thanks to the nice syntactic sugar available from the pipeline++ library, our pipeline literally looks like this in the source code:

Let’s go through the stages:

While prototyping, I spent some time exploring the YUV family of colour spaces.
I developed other pipeline components while exploring what was possible with dlib+OpenCV, including some labelling/annotating stages while debugging.

Blender has a Python scripting API which is nice, and a little IDE in the Blender UI itself for developing/testing scripts.  We can then invoke the script headlessly as part of a script for production use.

I pretty much can’t use ZeroMQ in a project without also promoting it in the write-up.  In order to avoid having to think at all about how we communicate between the C++ program and the Blender program, we will use ZeroMQ.  ZeroMQ provides strict communications patterns (e.g. request/reply, publish/subscribe, push/pull), and is easily (re-)configurable for communicating between:

It’s an extremely versatile networking library, I recommend getting familiar with it.  It is especially useful when you have several components written in different programming languages and you need to connect them.  Although for higher-level and more complex systems, gRPC is probably a better fit than ZeroMQ.

Most of what it does for me out of the box, I’ve implemented by myself in the past projects, and it really just is not worth the time / effort / risk to do that if ZeroMQ is available.

I found a suitable model on Thingiverse that I would like to transfer my expressions onto.  With hindsight, I should have taken a model with larger facial features, as the movements on this model were difficult to see.

After some UV-unwrapping and vertex painting, I had a pretty nice looking model.  Load in a city skyline background photo and the scene looked quite nice.  I felt that the scene still looked a bit empty though so I added some lightning, configured to crawl over my avatar’s skin in a dramatic fashion.

I added shape keys to the model, so I could easily control changes in facial expressions.

With the modelling delegated, painting done, and animation complete, shapekeying done, the remaining step is to integrate the Blender rendering into my video pipeline, using Blender’s scripting interface and ZeroMQ.  The blender scripting part was pretty simple – the online reference is quite complete, and the UI is helpful in showing me the underlying python commands for UI interactions.

So I ran the pipeline…..  and waited…  Ah crap, the blender file is configured to use the Cycles renderer.  I switched it back to the Eevee real-time renderer and re-ran.  I started getting frames back from blender, but the frame rate was horrible.  Maybe one frame every two seconds.  I reduced all quality settings in Blender as far as possible, and the render image size, but the latency was still terrible.

Getting real-time on-demand renders from Blender

Some lessons learned, from trying to get low latency rendering:

After replacing the shape-keys with hooks, and binding them each to the minimum amount of mesh necessary, the render time of the blender stage was now low enough for practical use in a real-time pipeline.

Ok, it wasn’t great, but it’s a good start.
Everything seems to be working as expected.

To improve it, the following should help:

I wanted to get familiar with the YUV colour space, and the direction of U/V axes used in common video formats.

A bash one-liner made it easy for me to input colour values and preview them:

Breaking this ad-hoc one-liner down into parts:

While (for the ~£50 I paid for it back in 2008) I can’t find any reason to fault it massively, I have finally decided to replace/augment it with a Roland A-88. That’s a full 88 weighted keys with piano mechanisms to add to the immersion. But also 3x the weight and with less controls.

Back when I used a desktop PC, I used the ultra-low latency JACK audio environment as standard, with the more friendly PulseAudio running on top of it. This way, I could plug the inputs and outputs of any programs together, for chaining effects, mixing, monitoring, etc. Like what KX Studio did for Creative sound cards, but on steroids.

On a laptop though, this isn’t so practical. JACK (and also PulseAudio with low fragment sizes) consumes quite a bit of CPU and battery, which isn’t ideal on a portable device. So I needed a convenient way to switch between PulseAudio→ALSA for normal use, and PulseAudio→JACK→ALSA for real-time use. Ideally in such a way that plugging in a MIDI controller causes switching to the JACK-enabled stack where PulseAudio has low fragment sizes (for low latency), and removing all MIDI controllers causes switching back to the (boot-default) PulseAudio with large fragment sizes (for low CPU usage).

Systemd to the rescue!

In addition to general system administration, systemd can also be used on a per-user basis (therefore not requiring root either). I chose to use systemd user services to orchestrate the audio configuration, since this is the exact kind of task that systemd excels at.

Helper script, placed in my user bin folder (~/.bin, or whatever you decided to call yours):

The synth@.service and keyboard.service files aren’t necessary if you always use some other program which can connect things up for you (e.g. Ardour). I use them for convenience to give a quick and simple plug’n’play experience for when I’m feeling lazy.

I called the helper script “synth”, and can use it to run FluidSynth with a specific soundfont: