This is a blatant troll post, if you’re here via LinkedIn then you may wish to skip reading it 😉

I got a new laptop.  It came with Windows 7 pre-installed.  I hadn’t used Windows for a decade, with the exception of an old XP installation I keep around for running Adobe Illustrator and COD4:Modern Warfare.  I decided to give Windows 7 a try.

Day 1: It’s sluggish and the UX is a decade behind the times, but otherwise it seems ok.  Boot time was around a minute which is pretty poor for a clean system with no user meddling yet, but not terrible.  After a while, some dialog popped up telling me to reboot the computer.  This was annoying, but it gave me the option to postpone it for a few hours (note: postpone permanently would have been a better option).

Day 2: Turn it on in the morning to check a bus schedule, and I get this: 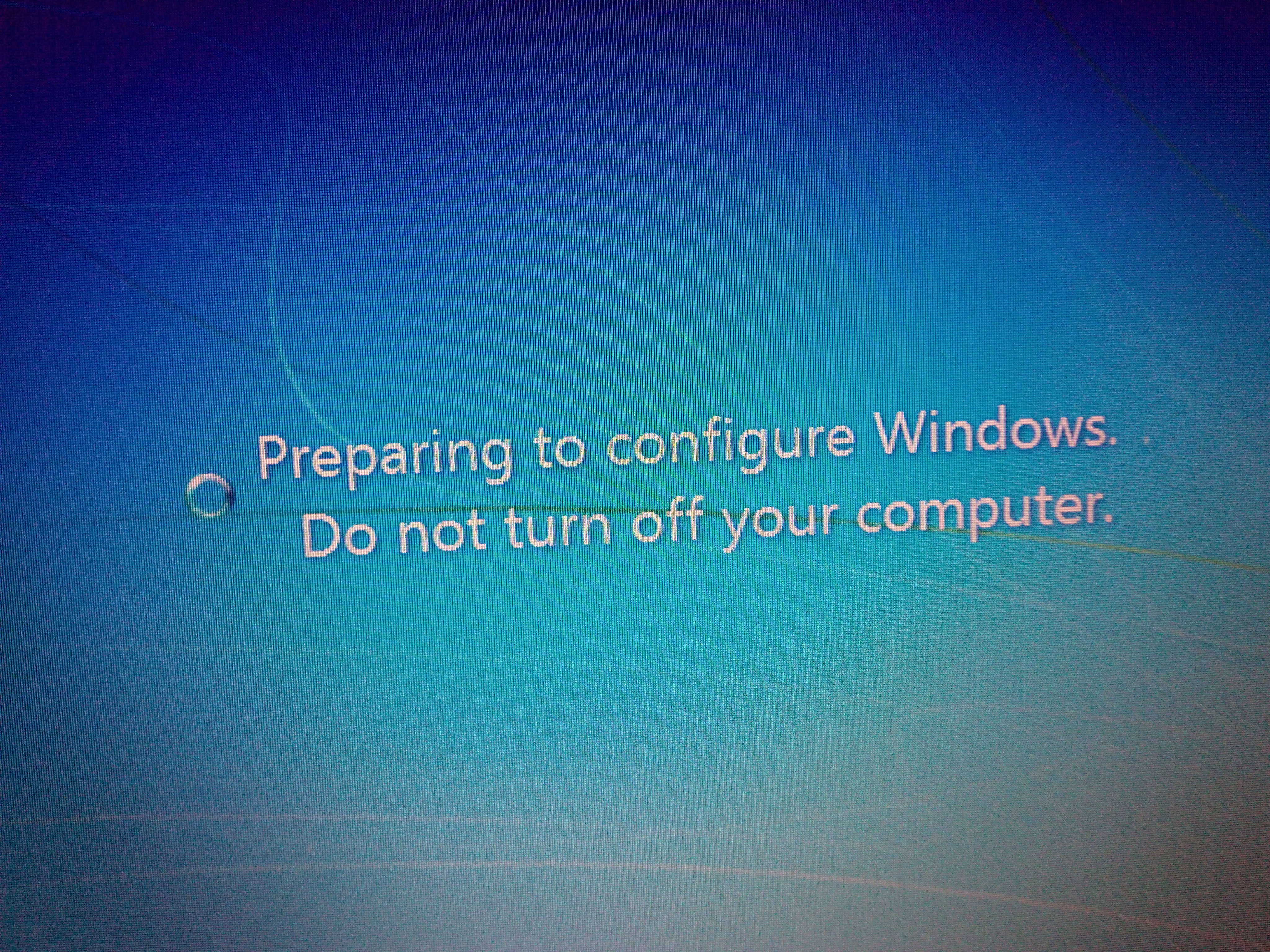 I hadn’t told it to update, and since I had tethered it via a 4G connection the day before, I was wondering how much of my data allowance it had burnt up downloading updates.

Linux systems* typically update when you tell them to and they install the updates in the background rather than hitting the user with this denial-of-service attach.  They don’t constantly pester you to restart the computer, nor do they also don’t forcefully restart the computer while you’re making a coffee, causing data loss.

* Excluding Ubuntu which may auto-update in the background.  Still, Ubuntu won’t hit you with DOS attacks or data loss as part of its update mechanism.

I’m a bit perplexed as to why Microsoft have decided that by design, their operating system should hit their users with denial of service attacks and potential data loss.

A few hours later when I got back home, it was still “configuring Windows”.  After quite a while, it rebooted.  Then I was greeted with this: 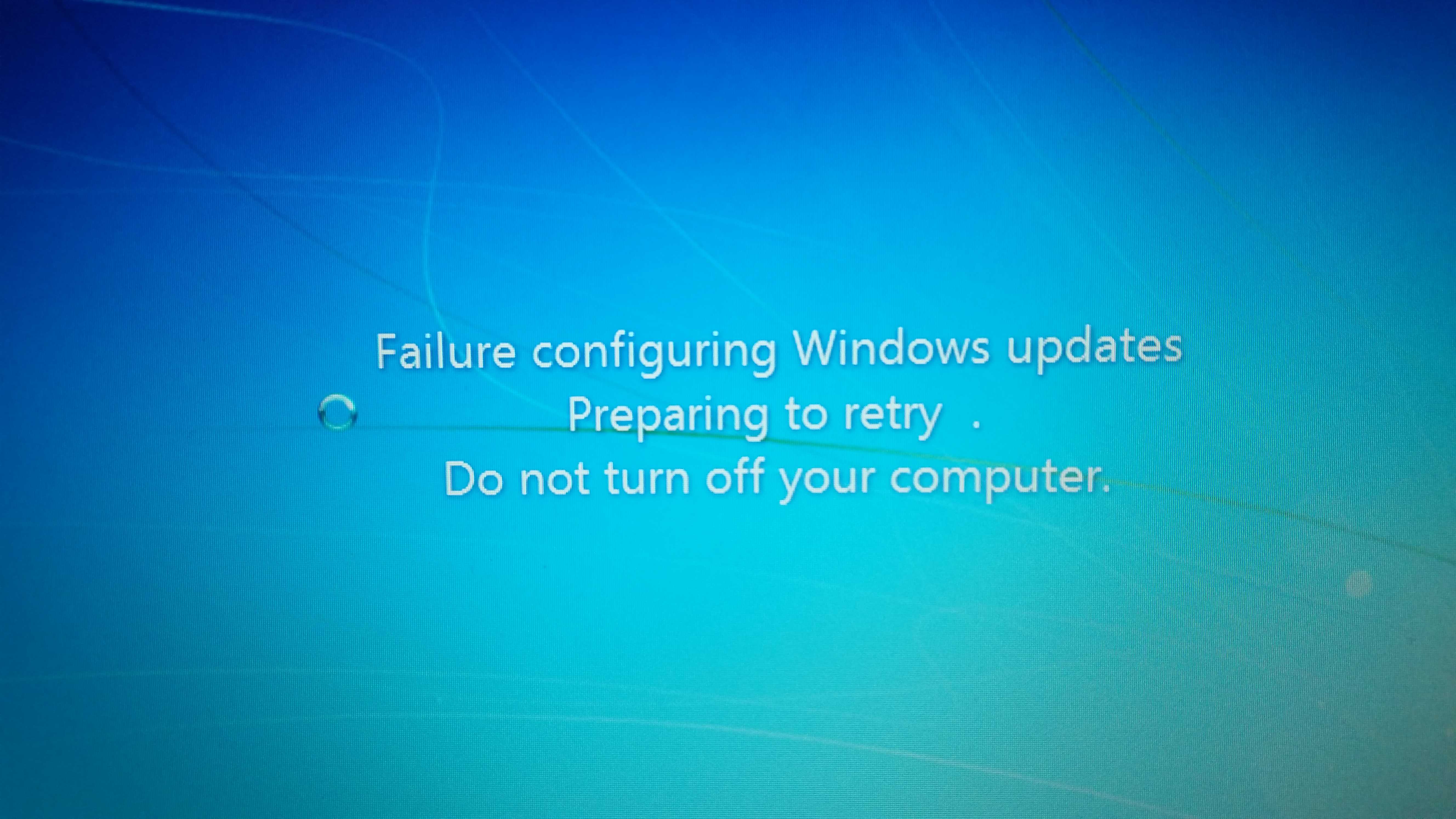 Another reboot followed, then more updating/configuring.  I don’t know how long this would have taken to finish, as I decided that I’d had enough of this proprietary crap… I powered the laptop off and removed Windows, then installed Arch and Ubuntu onto BTRFS with a shared home folder and automatic daily snapshot backups.

This Microsoft-originating denial of service attack also happened to another computer shortly afterwards.  The best solution for a home user is probably to just disable Windows Updates completely.  Sure you don’t receive security updates from Microsoft, but you also no longer get peroidically attacked by Microsoft either.  Accepting a low risk of being attacked in exchange for getting rid of a certain risk of being attacked.

This five-step process is quicker to do than the typical Windows 7 boot time, with or without Microsoft’s malicious updater enabled… 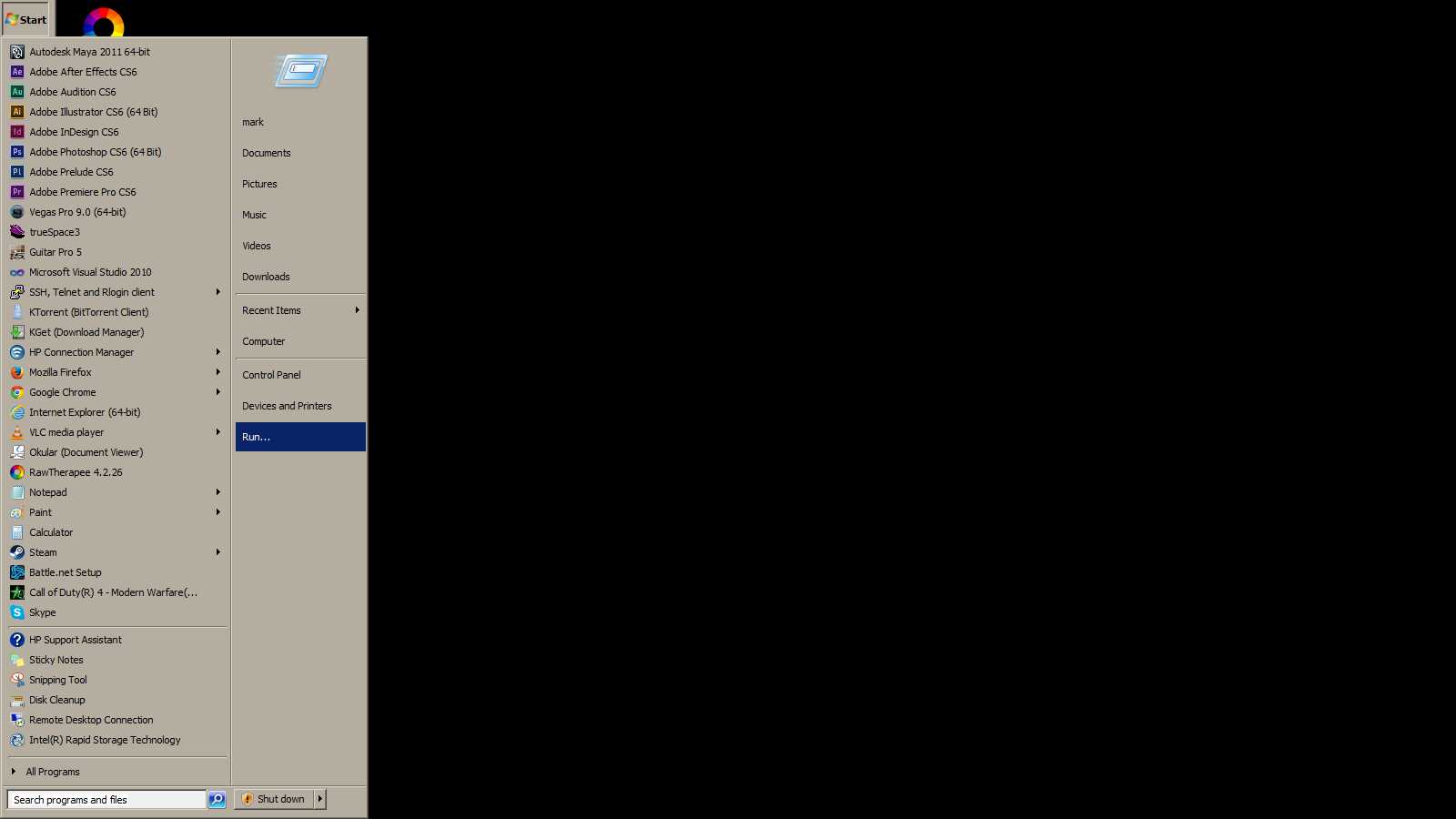 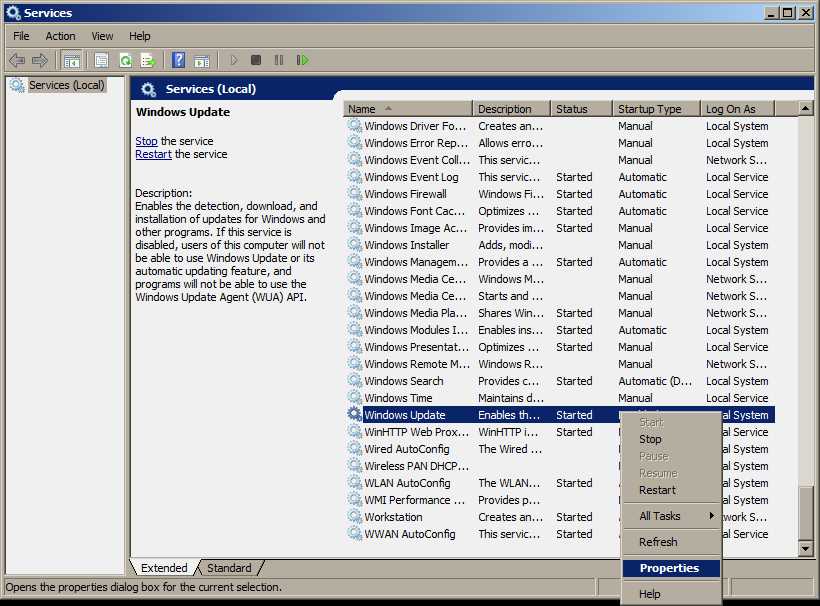 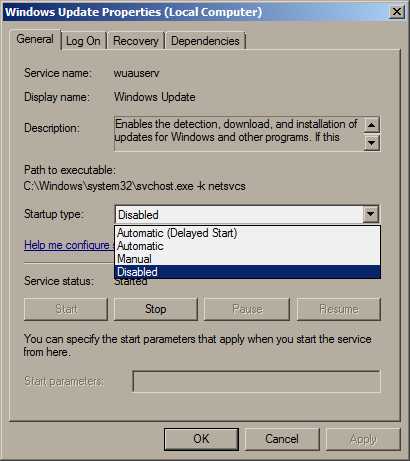 One would think that we could just mark it as “manual”, that way it will run only when we manually check for updates, but not when we’re on a mobile connection or when we’re streaming/gaming…  But as expected, Microsoft software does not do as it is told.  Leave it as manual and it will still occasionally burn bandwidth and pester you to reboot – but you won’t be able to manually check for updates as it will complain that the service isn’t started. 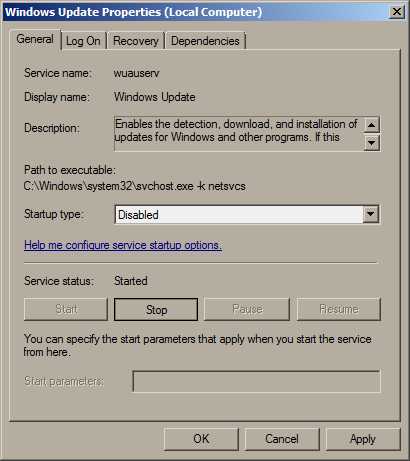 Hooray, that’s the biggest security vulnerability in Windows 7 (besides the OS itself) patched up 😀 And the Windows 7 boot time drops from five hours to five minutes 😀

But I can’t / don’t want to disable Windows Updates

Then instead find a similarly-minded friend…  You can play Hacky Racers with your windows 7 boot times!  Who’s machine will boot up first?  Extra ten points if it doesn’t do any reboots in the process! 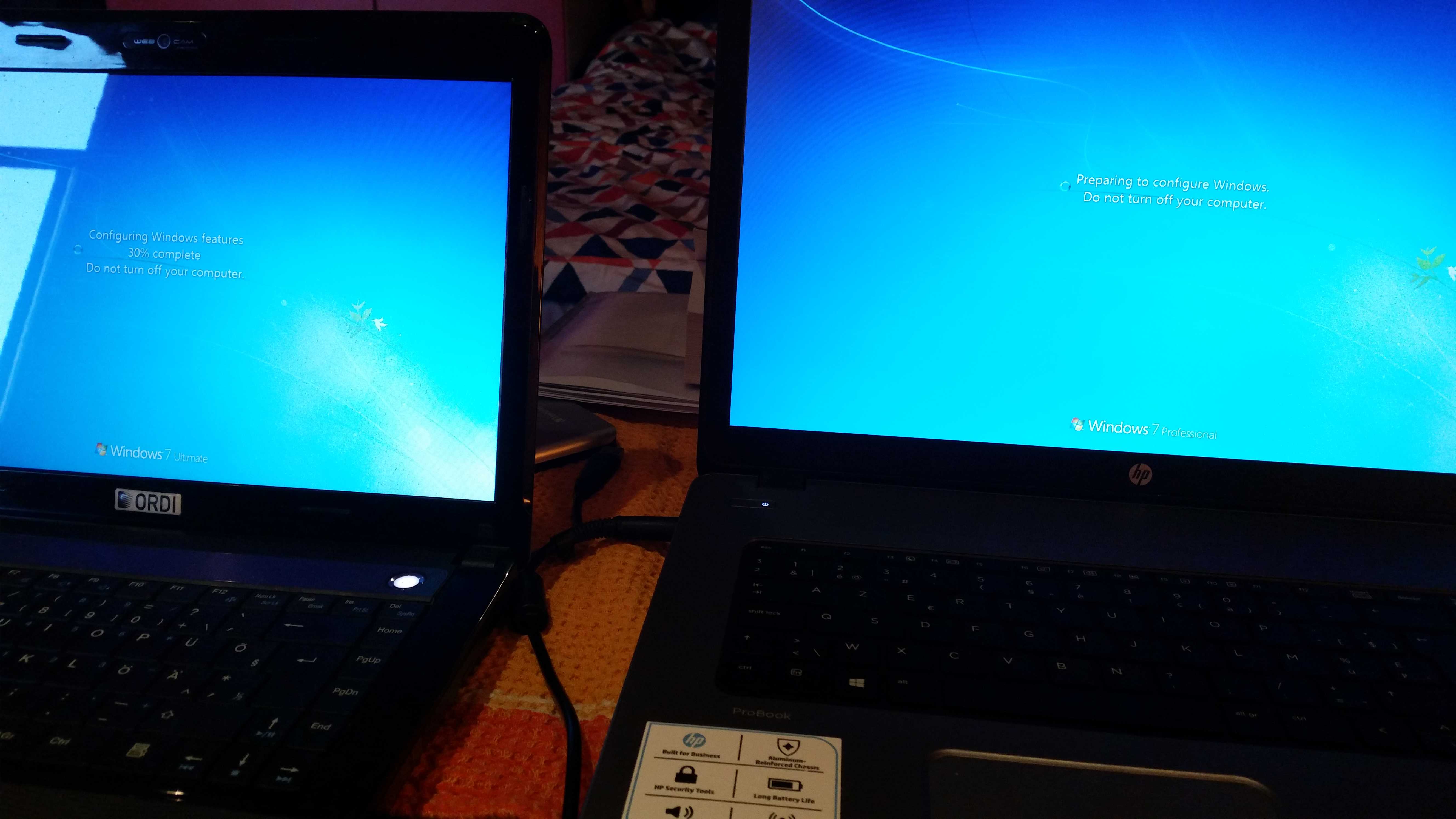